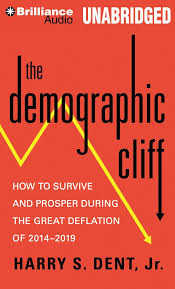 Harry S. Dent Jr. is an American economic forecaster who relies on analysis of demographic trends to make predictions about a large number of economic factors, such as consumer spending, commodity prices, the stock market, and waves of innovation. The crux of his argument in The Demographic Cliff is that slowing demographic trends around the world (i.e. a smaller generation following a larger one for the first time since the Black Death in Europe), coupled with enormous and unsustainable public and private debt that towers several times above most countries GDPs means that the entire world is primed for the worst economic downturn since the Great Depression.

Using research that Dent has acquired from the census and other organizations, he argues that people spend money predictably as they age, and using demographics we can predict when boom and bust cycles in the market will occur. For example, peak spending for the average American occurs around age 46. If you chart birth rates on a 46 year lag, you can see that the massive “Baby Boomer” generation peaked in spending between 2003 and 2007. With birth rates declining for the next 10-20 years you can see that this spending wave acceleration that made our country so prosperous through the ‘90s and early ‘00s began slowing in 2008, exacerbating the problems already present in the real estate bubble. And it’s only going to get worse as the Baby Boomers retire, meaning that they cease producing and start accepting retirement benefits.

Dent goes on to extrapolate how the demographic disadvantage of a younger generation saddled with debt having to pay for an aging larger generation affects all countries — and it’s not pretty. Governments faced with declining demographics increase stimulus spending in an effort to combat this, which Dent argues only pushes the crash further and further back, explaining that the more debt there is when the bubble inevitably bursts, the worse it will be for everyone. At the current trends, Dent predicts that the global economy will enter a massive depression by 2022 at the latest, doubling down that if it doesn’t he will quit his job as an economic forecaster and move to Italy. Either we stop accumulating debt and deleverage causing a bad decade or two, or we let the problem get worse and have a bad century.

He goes on to discuss how commodities impact emerging markets all over the world, and why China’s state-run push to urbanization and overbuilding of infrastructure will put them in a precarious position through the next decade. He explains the history of financial bubbles going from all the way back to the bursting of the “Gouda Tulip Bubble” in 1637 to the controversy and crisis in Greece’s debt in this decade.

Part 2 tomorrow will cover how Dent recommends we deal with the coming global crisis.

Depending on what you’re looking for and what you expect, using the word “dense” to describe a book can be either a good or a bad thing. The Demographic Cliff at 350 pages is incredibly packed full of information, speculation, data, charts, and history. I consider myself an avid reader and it still took me a few weeks of reading to plug through the whole thing. Dent argues from a heavily pro-capitalist perspective, but also refreshingly explains how more socialist governments like those in Northern Europe work just fine, and how the 80-90% urbanized world of the 21st century requires much more government and bureaucracy to keep it going — which isn’t necessarily a bad thing.

Though a challenging, and honestly quite dull read for someone who has no background or understanding of economics, Dent presents his ideas with enthusiasm and (sometimes too many) facts. I did think that trying to explain 10 year cycles in the market and why they are eerily caused by the number of “Sunspots” (literally sunspots. Like the ones on the Sun) to be totally ludicrous, and it would have been more believable if I didn’t think he was confusing causation with correlation. Besides that, I am by no means an economic expert, but I really enjoyed many of his thoughts and predictions and his explanations, at least to me, seemed all plausible at worst and fascinating at best.

The book starts off great with lots of valuable information, but it became somewhat of a chore to read the middle as the flow of the book gets bogged down in a ton of charts and details (which may be interesting to some, but I struggled a bit). Fortunately, the end picks up again as Dent talks less about what is happening and more about what can be done to take advantage of it, offering a plethora of unique and valuable insights about how to protect the money you have, and even prosper and flourish through the downturn ahead.

This book is for:

Anyone interested in global markets and economics who wants to better understand both why the next global crash is going to happen, and more importantly, how they can profit from it.

One thought on “The Great Depression of 2018 — Summary and Review of “The Demographic Cliff” by Harry Dent Jr. (Part 1)”